Watch video or refer to contents above to find the part you are looking for. 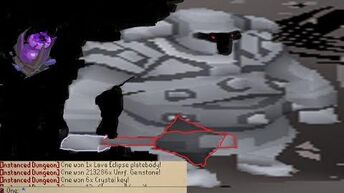 Instance Dungeon is a custom minigame, unique to Apex. It starts with a basic pre-quest then you are able to face the dungeon with Easy, Medium or Hard difficulty.

The format is the same for each of the difficulties but the monsters get significantly stronger, as do the rewards.

Let's dive into the prequest:

Teleport ::home and head south of the bank to talk to the Mercenary Adventurer

Go through the dialogue and get the Ingredients Guide on how to make a potion to weaken the guardian of the dungeon.

Demons Blood can be obtained from Tormented Demons at ::tds. With a drop rate of 1/250.

Draconic Dust can be obtained from the King Black Dragon at ::kbd. with a drop rate of 1/325.

Godly Essence can be obtained at Bandos or Saradomin through ::bandos or ::sara. with a drop rate of 1/150.﻿﻿

Devil's Foxtail can be found on Lunar Isle.

Teleport to Lunar Isle from the second page of city teleports and run north to find the Foxtail.

After you are at the gate, travel west, to the north of the wall, until you reach the fountain. Search the fountain to find rat poison.

Head to Varrock through the city teleports and run northeast to find the Varrock Museum. Search the display cases to find﻿ the Angels Heart.

COMPLETING THE QUEST! - Simply return to the mercenary adventurer with all the above items and he will take them from you with some dialogue, after which he will offer you the option to tele to his minigame.

Three styles of Gear is recommended but not needed, one will suffice. Regeneration potions make this dungeon much easier, it is almost a requirement but can be completed without.

Walkthrough of the Dungeon

Once you are geared up and have your three combat styles, ensure you are on the elemental magic book. (Normal magic book)

Grab an overload and have one sip, heal at home then enter the dungeon by talking to the Mercenary Adventurer.

You begin in the start room with several cooked slimy eels and a weakening potion. The Dungeon Guardian is blocking your path so start attacking him and use your weakening potion on him to deal serious damage!

Once you slay the Dungeon Guardian he will drop Bravery Potions. These heal you to full HP, prayer and work similar to extreme potions by boosting your stats to 117 and slowly wear off.

Head west and you will ﻿find Chaos Dwarves. These guys drop cooked eels (food), vials or water (for anti-poison) and lockpicks.﻿﻿﻿

Lockpicks can be used to open Closed Chests that are scattered throughout the dungeon to give you food and buff items.

Now, let's continue on in the dungeon to the first boss. You will need to use all 3 styles as indicated in the chatbox. While you are fighting you will see in the chatbox "The boss is now weak to melee attacks" or mage attacks or range a﻿ttacks and you need to change your style accordingly.

Change styles and watch your health when minions spawn at 90% HP!﻿

The boss will drop a stun scrol﻿l which is used for the next phase of the dungeon.

Head north of the first boss to a room full of wizards﻿.

Kill the wizards to get elemental runes and one set of infernal ashes. Gather around 300-400 of each elemental room then head north to the room filled with a Water Wizard, Fire Wizard and Earth Wizard.

You need ﻿to use:

Earth wave on the Water wizard

Fire Wave on the Earth Wizard

Water Wave on the Fire Wizard﻿

I like to head Northeast and single out the water wizard first then fight the other two.﻿

After you kill all 3 wizards, loot the chest in the center of the room to receive 4 Maxhit potions, which incr﻿ease your maximum hit by 40 for 45 seconds, and a task list.

Head to the east, along the northernmost trail, past several chaos dwarves until you reach a pack of skeletons. Follow the trail north past them to find the Giant Skeleton.﻿

Kill the skeleton to receive two more bravery potions and more importantly, the use of prayer!

Head south of the giant skeleton to find regular skeletons which you should kill to get Blindweed.

*CAUTION* If the Boss Guardian poisons you, use the Cure Magical Potion to alleviate the poison. Otherwise you will receive constant damage for the rest of the d﻿ungeon!﻿

Now that you have defeated both of the Boss Guardians, it's time for the final Boss!﻿﻿

How the Boss attacks:

During the first phase and start of the second phase you will need to prayer switch based on the attack he uses. You will have a second or two to switch which is plenty of time but if you miss then on hard mode he hits up to 90!

Here is what the attack looks like when you should pray Deflect Range.

Here is what the attack looks like when you should pray Deflect Mage.

You will ﻿need to make a salve amulet so you can attack the boss.

Once you go in, head over to the Dwarven Miners and pickpocket them until you get a bronze pickaxe.

Once you have the pickaxe, mine each Crystal outcrop until you get a salve fragment.

Once you get the gem, select the pickaxe and give it back to the dwarven miner. He will give you a scroll and you are now able to make the amulet.

Head to the southern portion of the Boss Room and click on the table to make the salve amulet.

Now you are ready to fight!

Equip your salve amulet and attack the boss. Remember to keep prayer switching.

At 70% HP he changes tactics and YOU DO NOT NEED TO PRAYER SWITCH AFTER THIS.

At this point and for the rest of the boss, use soulsplit.

At 45% HP he will summon a follower that can KILL YOU IN ONE HIT.

At 30% HP he will summon three minions which you must kill in the order of:

After the last minion wave just take down the boss and you are done!

He may spawn fire that will hit you for some damage but you should be able to tank through it with soulsplit.

Congratulations! You have finished the instance dungeon.

Community content is available under CC-BY-SA unless otherwise noted.
Advertisement